At this year's conference site, an EPC UHF RFID system, supplied by DDesign and Litum, confirmed the identity of each of the 60,000 attendees.

When 60,000 politicians and government leaders, along with their associated staff, arrived at the 2015 Litum Technologies and DDesign Communication Systems, consisted of 20 RFID reader portals at the conference's entry points, as well as handheld readers connected to tablets to identify individuals on the premises when needed.

DDesign provided its D-Access Software (DAS) to manage data about each summit attendee, including that person's name, picture, country or organization, and also installed the solution, which it dubbed the Turkey Accreditation System. The system included DDesign's server, says Ali Mahmut, DDesign Communication Systems' coordinator, where attendees could register prior to the event, and where they could have a badge with the appropriate classifications printed for them. Litum selected and provided the hardware, consisting of Impinj XPortal readers, the badges with Impinj Monza 4 chips, and uGrokit's Grok handheld readers plugged into Apple iPads.

When a G20 attendee walked through an entrance portal, the RFID reader captured the unique number encoded to that individual's ID card, prompting the person's name and photograph to be displayed on the LCD screen mounted overhead.

The 10th annual meeting of the heads of 19 nations, as well as representatives from the European Union, took place in November at the Regnum Carya Hotel Convention Center, located in Antalya, in southwestern Turkey. At the event, the G20 members adopted a declaration on fighting terrorism, among other business.

Months of planning took place prior to the conference, however, in order to ensure the security of those attending. The Turkish government asked Litum and DDesign to develop a solution, according to Alp Ülkü, Litum's business-development director. The challenges were unique due to the large number of high-profile individuals who would arrive, requiring security without disrupting those guests as they entered. The head of each member nation brought an entourage of advisers, diplomats and support workers, all of whom would need to gain admittance efficiently while having their identities confirmed. 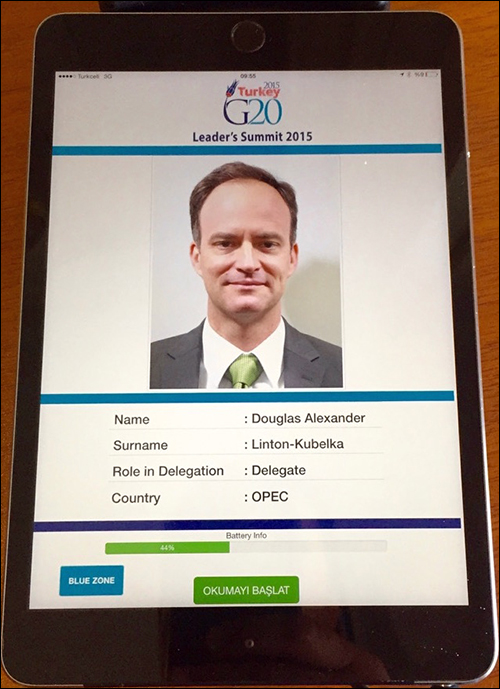 Security personnel used iPads mounted on uGrokit handheld readers to re-identify individuals after they had entered the facility.

The Turkish government also needed to be able to identify individuals at the summit on a case-by-case basis if, for instance, there was a problem at the facility that required security assistance. With the RFID system, not only could attendees arrive without having their credentials physically checked, but security personnel could also confirm who they were, without physically stopping each person and requesting his or her identification.

Litum and DDesign spent several months on site to install the xPortal readers. They also worked to ensure that they could capture the ID number of every tag worn or carried by attendees as they entered the facility.

Each of the 60,000 participants (with the exception of each country's president or leader) carried an RFID identification card with his or her own name and picture printed on the front. The EPC UHF RFID chip embedded in the PVC-covered badge was encoded with a unique ID number linked to that individual's name and picture in DDesign's software, residing on a dedicated onsite server. DDesign mounted an LCD digital screen above eachportal, facing security staff members who stood inside the facility to greet arriving guests. 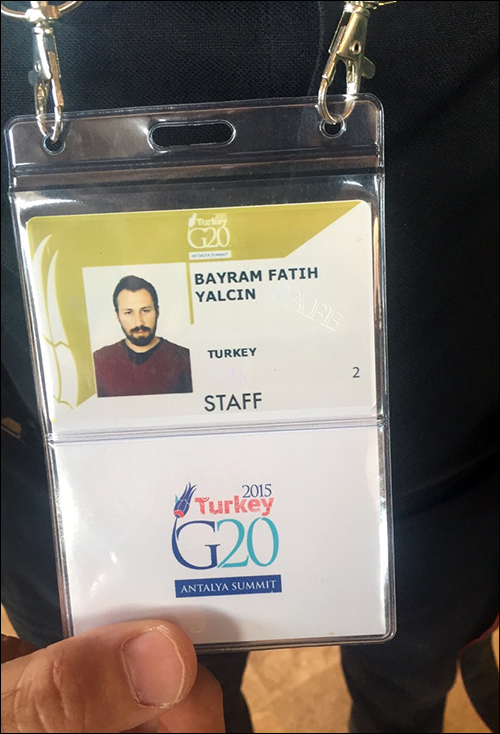 Each attendee was issued an ID badge containing an RFID inlay made with an Impinj Monza 4 chip.

Security employees equipped with iPads mounted on uGrokit handhelds could walk near a group of people and view the images and names of all those within read range of the device, displayed on their iPad. This provided a level of security so that workers could, for instance, confirm who was in the area and who might need to be spoken to or removed for security reasons, or simply confirm who was present in a higher-security area—for instance, in close proximity to world leaders.

"This was a unique project due to the high need for security for top-level politicians and diplomats," Ülkü says. The two RFID companies designed the doors and portals to enable the reading of tags beginning in late summer, ahead of the summit. "We needed them to be designed in an RF-friendly way so that there was no reflection [that might potentially interfere with the signals transmitted by the RFID hardware]. There was no room for technical issues with this project."

Following several months of testing, Ülkü says, DDesign and Litum were certain that the technology would provide 100 percent coverage without requiring any entering dignitaries to be stopped and questioned. A team of technicians for the two companies were onsite throughout the summit, he adds, though the system worked without requiring any intervention.