French startup MediHandTrace is providing hospitals with a system that uses RFID-tagged footwear to track whether staff members are following proper hand-hygiene protocols.

According to the World Health Organization, seven percent of hospital patients in developed nations will contract a hospital-acquired infection (HAI), while the number is about 10 percent in developing countries (though much higher than that in some nations). In 2006, French engineer and physicist Bernard Delord started looking for technological solutions to a universal health-care problem: preventing the spread of HAIs caused by poor hand hygiene. 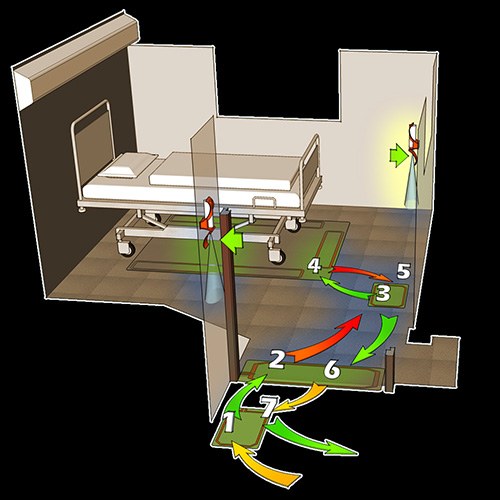 Delord says he was concerned by his observation of a near absence "of hand hygiene in agro-food, as well as in hospital environments." In addition, he says, he was disturbed by the high level of deaths resulting from infections due to a lack of hand hygiene. In France, he reports, the rate of such deaths is four times higher than those resulting from vehicular accidents.

Although Delord found some solutions in use by hospitals to measure hygiene compliance, including technological ones, he found shortcomings in all of them. For example, many systems collect hand-hygiene statistics by tracking when and how often health-care workers wash their hands, but do not provide real-time feedback to the caregivers. In addition, he found that there was a fairly predictable route that health-care providers should follow as they provide care—namely, disinfecting hands outside an examining room, inside the room (after touching the door handle to the room), upon walking to the patient's bedside, and then while returning back through that process in the opposite direction.

Delord patented his idea for an RFID solution that would track all of those steps, capturing employees' movements via RFID readers and antennas in the floor. He then approached French technology company Micro BE to develop the readers and antennas, as well as the software that manages the collected RFID read data, provides analytics and issues alerts in real time. He also met with Ephygie-Hand, which provided the patent and managed the project.

The companies teamed up with the Infectious and Tropical Diseases Department of North Hospital, in Marseille, led by Philippe Brouqui, where the system was tested for three years and remains in place to this day. In the meantime, Delord, working with Micro BE and Ephygie-Hand, founded MediHandTrace to market the solution under the same name, with Delord serving as CEO. MediHandTrace is now in discussions with several hospitals around Europe, as well as in North and South America.

The company offers two versions of its MediHandTrace solution. One is the seven-step system that was tested at North Hospital, which comes with four Micro BE custom-designed high-frequency (HF) readers, each with its own antenna embedded in the floor. The seven-step system tracks an individual's presence at one of the four read zones during a staff member's visit with a patient: at a dispenser in the hall, at the room's entrance, at the second dispenser in the room, and at the patient's bedside, as well as during a return in the other direction for the final three steps. The system's configuration for each hospital would vary according to its needs, but would typically verify whether each employee used the hydro-alcoholic solution dispenser in steps 1, 3, 5 and 7—a total of four times during the visit with a patient.

The mobile solution, on the other hand, offers an alternative for those seeking only temporary audits, according to Francine Lanceleur Brenning, MediHandTrace's development, marketing and sales director. The mobile version consists of a single reader, installed at a single hand-washing dispenser within a patient room, and an antenna that stretches to the patient's bed, in order to track a physician's movements from the dispenser to the patient and back again, and to verify that the doctor used the dispenser a total of two times during the visit with that patient. This less-expensive version is intended to be installed temporarily, at different locations.

The plan with the mobile version, Lanceleur Brenning explains, is to equip at least three patient rooms with that version and to issue tagged shoes to all health-care workers. The system tracks the individuals' presence 24 hours a day throughout a two-week period. "The aim is… to take a picture at a given moment of the hand-hygiene compliance level in hospital services that are not highly critical," she says. (Examples of critical services include ICU, neurosurgery, urology and geriatrics.) "Then, appropriate corrective solutions are provided to improve the team and individual behaviors."

For both versions of the MediHandTrace solution, every worker is issued a pair of smart shoes. Each shoe in that pair has a HF 13.56 MHz RFID tag, compliant with the ISO 15693 standard, embedded in it. (The make and model of the tags varies, but MediHandTrace declines to name the ones that have been used for the North Hospital deployment to date, saying merely that its solution is tag-agnostic.) Both tags in a pair of shoes are encoded with the same unique ID number, which is then typically linked to information about the individual wearing the shoes, such as his or her job description. Less typically, the system actually links the shoes to that person.

Since the hospital assigns the shoes to that individual, staff members need not remember to bring an ID badge or tag that would be pinned to a jacket or worn on a lanyard. A worker can simply report to work and put on the hospital shoes.

As the health-care worker moves around the room, the MediHandTrace software collects data and determines whether that individual is adhering to proper protocols by following steps 1 through 7. The software also receives data regarding the length of time that the hand-hygiene dispenser is being pressed, thereby indicating how thorough a hand-washing is taking place. If there is a problem that requires an immediate response, such as a worker approaching a patient without having washed his or her hands, an alert can be sounded on the dispenser.

During the three-year test, the MediHandTrace system recorded more than 20,000 completions of the seven steps by health-care workers during patient visits.

Brouqui says he wanted to assess actual hand-hygiene compliance rates against the rates perceived by health-care workers, and also to raise the actual compliance rate. The department began at about 20 percent compliance three years ago, and now has achieved approximately 50 percent. Brouqui's goal is to reach a compliance rate of 80 percent.

The department provided RFID-enabled shoes to 42 staff members, and installed the reader array in seven of 15 rooms within the infectious disease ward. The MediHandTrace software captures and stores each action by workers in the seven RFID-enabled rooms, and sorts the results according to a particular employee's category. The information is then displayed on a computer monitor in the nurse's staff room.

The software can also identify when exceptions occur and why. For instance, if a worker is bringing a food tray to a patient, she may have her hands full and be unable to stop and wash them at each dispenser (and may not need to do so since she is touching nothing but the food tray). The software can be programmed to make exceptions for personnel whose RFID shoe tags are linked to a job title that involves food delivery during certain periods of the day (such as at lunch time), Lanceleur Brenning says. And in the case of specific diseases—clostridium, for instance—software is programmed to make exceptions for staff members who wear gloves.

Brouqui says he also worked with MediHandTrace to develop a function within the software to link the unique ID number on the shoes' tags to a cell phone number, and the system then sends a text message to the individual's phone detailing that person's hand-hygiene compliance performance. In that way, employees can learn whether their perceived compliance is accurate.

Prior to the implementation of the SMS messaging feature, Lanceleur Brenning says, some managers were asking, "Why aren't my team's compliance numbers up?" She explains, "We decided a simple SMS system to send messages to their mobile phone every two weeks would help."

"There is a big gap between what is observed and reported in hospitals on hand-hygiene adherence… and what it is in the reality," Brouqui says, as measured by MediHandTrace. Next month, he notes, the hospital will enable the alerting function so that the hand-hygiene dispenser will sound an alert if a staff member misses a hand-washing event before visiting with or leaving a patient.

According to Brouqui, the hospital could use the technology to track individuals and their compliance against the performance of others, though it has no intention to do so. Instead, he says, the goal is to help workers view their own compliance results, and to enable health-care teams to increase their performance as they become more aware of when and how often they fail to comply.

Next year, Brouqui says, the department will move to a new building containing 100 patient rooms. The MediHandTrace system will be installed in each of those rooms.

In the meantime, MediHandTrace is in conversations with other potential customers around the world, not just in health care but also in other markets in which hand hygiene is of importance. "Our objective is to promote, on a large scale, our unique solutions of traceability dedicated to hospitals, pharmaceutical and food industries," Delord states. "Our strategy comprises several development levels: new applications of hygiene traceability, enlarge our territorial conquest and diversify with market segments."