Labriola Ristorante keeps order delivery times down to 10 to 12 minutes with the help of an RFID-based paging system from Long Range Systems, which helps runners find customers in the café or bar, or on the patio.

At Labriola Bakery & Café's first location, in Oak Brook, Ill., guests order baked items to go, or to take to a table. When the company opened a new location in Chicago, known as the Labriola Ristorante, it featured a restaurant, patio seating and a bar. Operations manager Edwin Arreola sought a technology-based solution that would keep breakfast and lunch traffic moving and ensure that meals reached customers as soon as they came out of the oven. Specifically, he wanted to make sure that customers received their food 10 to 12 minutes after ordering it, no matter where they were sitting.

The solution chosen was Table Tracker, an RFID- and ZigBee-based system provided by operations technology solutions company Long Range Systems (LRS). The system was taken live when the restaurant opened in January 2015, initially in its café and bar, and was expanded to the outdoor patio area this summer. 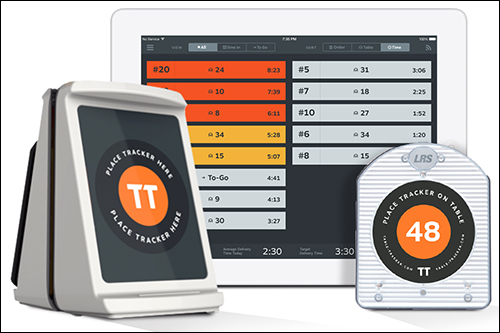 The café seats 90 to 95 patrons at approximately 25 tables. A 13.56 MHz RFID tag, compliant with the ISO 15693 high-frequency (HF) air-interface protocol standard, is affixed to the underside of each table. That tag, provided by LRS, has a unique ID number encoded on it, explains Michelle Strong, LRS's chief marketing officer. Labriola also applied tags at its bar, in front of 15 stools, and under about 18 high-top tables in the bar. Most recently, the tags were applied to 20 tables in the outdoor patio area.

When customers place a food order, that order is input into the restaurant's Aloha point-of-sale (POS) system. The customer is then handed a rechargeable Table Tracker device. A staff member inputs the Tracker device's number into the POS system to store the Tracker ID with the order. The customers then carry the Tracker to a table or bar, enabling the serving staff to locate them when their order is ready. The Tracker has an HF RFID reader built into it, as well as a ZigBee device to transmit read data back to the Table Tracker software residing on a cloud-based server, via a single ZigBee gateway device.

When the Tracker is placed on the table, it reads the ID number of the tag affixed to that table's underside, then forwards that ID, along with its own identifier, to a gateway via a ZigBee mesh network. The gateway then transmits the information to the Table Tracker software.

There are two screens set up at the restaurant for displaying order status and location data: one in the kitchen and another at the drink station. When an order is ready, the wait staff can view the Tracker number in the Aloha software, and then refer to that device's location in the Table Tracker software, also open on that screen. They then carry the food to that table or bar location. Beverage runners use the technology in the same way.

Once the food has been delivered and the customers have indicated they have all that they need, the runner taps a clearing unit tag, carried on his or her person, against the Tracker, thereby closing the order in the software.

Because the restaurant strives for very fast service, Arreola says, the Table Tracker software is programmed to display the order number in yellow 10 minutes after the order was placed, and then in red at the 12-minute mark. Labriola's management can run reports to ascertain how efficiently orders are being delivered, he adds, according to the time of day and day of the week.

According to Arreola, the technology leads to more repeat customers, based on their satisfaction with service at the establishment. "We've had very positive feedback [from customers]," he states. "The terms they've used are 'amazing' and 'fantastic'." Although he had worried about Internet connectivity problems, he notes, there have not been any to date, and data on the cloud-based server has always been accessible.

In the future, Arreola says, Labriola also intends to install the technology at its first location in Oak Brook, though no specific date has yet been set for that installation.

Labriola is using the newest version of Table Tracker, which was released during the past year, Strong says, and is intended to be flexible enough to meet the needs of a broadening base of restaurants and cafeterias. While the company's solution was initially aimed at fast casual restaurants in which the food-ordering model was fairly simple (customers ordered at a counter then proceeded to a seat, where the staff soon delivered their food), it is now meeting the needs of other types of restaurants, as well as cafeterias in businesses and hospitals, fast food restaurants and grocery stores.

LRS makes its own gateway and Tracker devices. Because the businesses using the technology are often quite large, the latest version of Table Tracker can accommodate as many as 125 Tracker units at a time. The company also offers an iOS app so that data can be stored and displayed on Apple iPads. In addition, the software can filter data so that the Trackers can be displayed in categories, such as to-go orders versus dine-in orders. The software can be located on a cloud-based server or on the restaurant's own server.

The company is currently in conversations with several potential end users in other markets, Strong reports. These include blood banks and businesses that need to locate individuals while providing services.