The company's Analytics 360 solution uses battery-powered Bluetooth beacons and is designed to be easy and inexpensive to install.

Panvista, a mobile-intelligence company based in Toronto, Canada, is providing a solution that uses Bluetooth Low Energy (BLE) beacons to help exhibitors and trade shows identify where people are located and how long they spend in given areas, such as at a specific booth. The system, known as Analytics 360, helps show exhibitors to better understand their booth visitors, and enables event organizers to generate additional revenue through better planning and more appropriate pricing for booths, based on traffic flow.

The company was launched approximately seven years ago to offer apps that help trade shows and exhibitors share content with their visitors. About two and half years ago, says Andrew Echenberg, Panvista's president, customers began asking questions about what else an app could provide them. They sought to know not only how much activity there was on an app, but also physical data related to an app user's location, in order to help them identify how attendees behaved. These companies wanted a way to identify how successful their show was, areas in which they could improve and what business opportunities were available. Often, a trade show consists of hundreds of thousands of square feet containing thousands of attendees, and knowing how that space is being used is almost impossible.

Many companies utilize Google Analytics or similar services to track and report website traffic. Panvista's goal was to find a way to take that kind of analytics to the physical world, Echenberg explains, adding that Analytics 360 is intended to help trade show exhibitors understand, "What does busy mean?" For instance, he says, if a company's booth is filled with people, what value is there in that activity? Are they spending any time there? Are they learning more about a particular product or service? "Our premise was a technology that addressed questions that weren't being answered," he states. 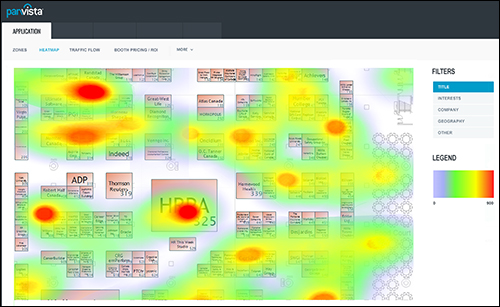 The company found that passive ultrahigh-frequency (UHF) RFID tags and readers provided a limited solution. The readers could be installed at key locations, such as in doorways, to read tags in attendees' ID badges in order to track how many people passed through an area and when this occurred. However, the collected data would be limited to areas where the interrogators were installed, and the readers themselves tend to be expensive, as does the installation of those devices.

Beacon-based data could be acquired less expensively, Echenberg says; however, using mobile apps to gather data has its limitations, since doing so requires that users first download the app and enable their smartphone's Bluetooth functionality. Those requirements, he notes, reduce the percentage of attendees using the system.

Therefore, Panvista developed an alternative solution that involves the use of a BLE beacon incorporated in a smart badge worn by each attendee. In this case, upon signing up for the show, an attendee would provide personal data, including his or her company, job title and interests. This information can then be stored along with the ID number transmitted by the Bluetooth beacon in that person's smart badge.

As the individual walks around the show floor, Panvista-made sensors—Bluetooth receivers measuring 3 inches in width by 12 inches in length, and installed at various locations—allow the system to automatically track his or her location and dwell time at any given spot. This data can help exhibitors and trade show organizers to understand their attendees, as well as where they go and what interests them. This enables those companies to improve on traffic issues in areas where numbers may be low, or to increase the leasing costs for a booth in cases in which traffic to a booth is consistently high.

The Analytics 360 solution also comes in the more traditional app-based BLE version. In this case, a trade show exhibitor and organizer only requires the placement of a few Panvista battery-powered beacons around areas of interest. Manufactured in Canada by Panvista, the beacons are inexpensive, Echenberg says. Six or seven are typically required to cover a 100,000-square-foot exhibit hall, and such an installation would cost $5,000. Attendees download an app created for that event, enabling them to receive content that is of interest to them, based on their approximate location, as well as the interests they indicated when downloading the app. That content can include such information as a demonstration occurring in five minutes at a booth within their vicinity, or free samples being distributed nearby.

In either scenario, Echenberg says, the deployment is fairly simply. An exhibitor or exhibit manager would access the Analytics 360 software on a cloud-based server, create a map of their facility and then place beacons or Bluetooth sensors around the show floor, indicating in the software where they are being installed by clicking on the floor map. The software then calculates the locations of badges or mobile phones running the Analytics 360 app, based on the read range and on which sensor is transmitting to that badge or phone.

Echenberg reports that a handful of trade shows and exhibitors have deployed the technology to date, with a new version of the system being launched this month in Boston, Mass., though he is not at liberty to name the event. While the current versions of Panvista's Analytics 360 solutions can identify individuals based on the beacon device to which they are nearest, the next generation being launched will use triangulation to help exhibits and trade shows to identify more specifically where an individual is located within a large space.