The soup company inserts tiny RFID sensors into chunks of meat, vegetables or potatoes to track the temperatures of a soup mixture as it travels through a network of heating pipes.

The Campbell Soup Co. is employing an RFID-based solution to test the operation of its aseptic cooking system, by measuring the temperatures of chunks of meat and vegetables as they travel through heating pipes through which a soup's liquid and solid ingredients pass and are cooked prior to being packaged. The system consists of a low-frequency (LF) RFID temperature sensor tag inserted in a solid piece of food, as well as RFID readers with antennas wrapped around certain sections of pipe. The technology, provided by Phase IV Engineering, is being used at Campbell's research and development laboratory at its world headquarters in Camden, N.J., to determine whether the continuous-heating system is bringing the soup's ingredients to the proper internal temperature, before the heating system is actually used at the processing plant. (The sensors are being utilized only for testing the heating system, and never to track the temperatures in batches of food intended for human consumption.)

The Campbell Soup Co. has several processes for cooking its products before selling them to consumers. In some cases, Campbell's Soup is cooked in a process known as continuous cooking, by way of a long, heated, stainless steel pipe extending to the factory's packaging area. As the soup passes through the pipe, the heating elements raise its temperature high enough to cook it and ensure aseptic conditions, not only in the liquid, but also at the center of any solids. The cooked soup is then cooled and poured into sterilized packaging. 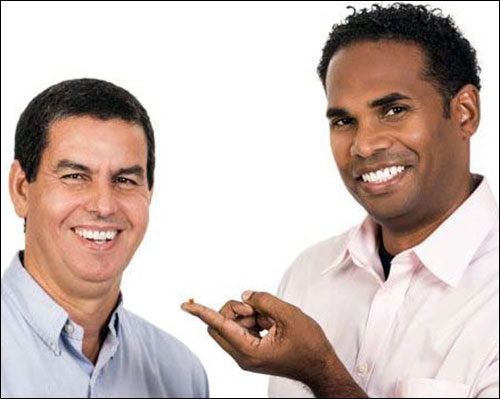 Making sure that a specific pipe heats a soup mixture to the proper temperature requires some research and development work. Insufficient heat could lead to critical problems, but excessive heat isn't desirable either, since that could affect the soup's taste or consistency, as well as waste energy.

Approximately four years ago, the soup company began seeking a technological solution to measure the interior temperatures of solid food particles (which can be the most difficult part of the soup to cook properly, and the most difficult ingredient to measure for temperature). "Campbell was looking for a partner that could manufacture and deliver an RFID device that could measure temperature in a small footprint," says Rasheed Mohammed, the company's senior program manager for science and technology. Campbell needed to monitor temperatures with a device that could withstand the aseptic process conditions, he adds, and at a reasonable cost. In addition, it needed to be able to track the temperatures in food chunks as they moved relatively quickly through the heating piping.

"An initial search led us to discuss this opportunity with Phase IV," Mohammed says. "Our role was to manage the project and relationship, as well as help lead the design and testing of the devices and system."

Scott Dalgleish, Phase IV Engineering's CEO, says, "Campbell needed an incredibly small sensor. It had to have such a small thermal mass that it wouldn't affect the temperature of the meat. They needed to be able to read the temperature as the meatball was moving, without influencing the heating process in any way."

The sensor tag that Phase IV provided was made with an LF 134 kHz RFID chip containing a built-in temperature sensor, with an antenna wrapped around it, resulting in a tag that measures less than 6 millimeters by 5 millimeters by 4 millimeters (0.24 inch by 0.2 inch by 0.16 inch). The company also provided its own RFID readers, with each reader's antenna wrapped around a piece of high-temperature plastic pipe that replaced a similarly sized section of the stainless steel pipe used for the aseptic cooking system. In total, approximately six readers were installed.

As the soup passed through those sections of piping, the reader antenna energized the sensor tag inserted inside each chunk. The antenna then read the tag's response, which included the temperature measurement. 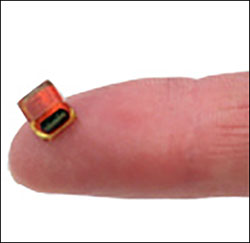 Campbell and Phase IV opted for LF transmission as opposed to ultrahigh-frequency (UHF) or high-frequency (HF), Dalgleish reports, because LF signals travel well through liquids, and Phase IV's LF chip can withstand the conditions within the pipe, in which temperatures can be as high as 170 degrees Celsius (338 degrees Fahrenheit).

The read data is collected by Phase IV software residing on a PC at the heating system test site. This enables Campbell's staff to determine whether the temperatures are within the acceptable threshold at various sections of the piping. Engineers can then adjust the settings within the pipe, in order to ensure that the optimal temperature is reached for that type of soup and the chunks of vegetable and meat it contains.

Campbell adopted the Phase IV solution in 2011, Dalgleish says. Since then, he notes, the RFID temperature-sensing system has been used to help the company's researchers ensure that the cooking system is working effectively for each soup type before it is cooked for consumers at the processing plant. "The RFID system is used whenever there is a need to get data to validate a process or come up with a new process for new products," says Mohammed Karkache, the senior program manager of Campbell's soup R&D department.

The company's next goal, Karkache says, is to use the RFID system to facilitate the development of new aseptic continuous-heating systems requiring approval by the U.S. Food and Drug Administration (FDA). "Future plans are to test and validate the system for use as a tool to design, optimize and facilitate food systems containing particulates," he states, "with the intention of presenting the system design and data to the FDA for review as a method for aseptic validation."

Ultimately, Rasheed Mohammed says, the system is intended to reduce the amount of time employees spend optimizing the aseptic cooking systems, "with the goal of delivering higher-quality foods to the consumer."